The federal government accused a 6-year-old of plagiarism and stripped her of her victory in this year’s national Junior Duck Stamp contest, leaving the youngest-ever winner in tears and igniting a fierce debate in the wildlife art community over artistic techniques, precocious youngsters and catty parents.
▼▼▼ Read More :)
The U.S. Fish and Wildlife Service, which runs the annual contest, says that by first tracing the outlines of her duck from one of her father’s unpublished photos before painting it, Madison Grimm violated the rules.

When Madison Grimm of Burbank, S.D., won in April, her age raised concerns about the legitimacy of the painting. The U.S. Fish and Wildlife Service then disqualified her for using a transfer technique, but then reversed the ruling on Thursday.

A 6-year-old girl from Burbank, S.D., was reinstated as the winner of a national duck stamp competition on Thursday. 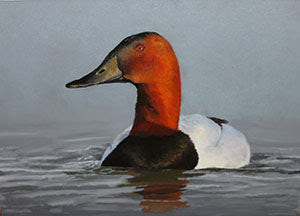 Seriously?
Perhaps a bit of oil over a copy of the original?

Even though her oil painting of a canvasback duck won the 2013 Federal Junior Duck Stamp contest on April 19, Madison Grimm was notified a week later that she had been disqualified. The U.S. Fish and Wildlife Service, which sponsors the annual contest, said she had broken the rules by using a graphite transfer technique. But the agency continued to review its decision, and announced on Thursday that Madison’s win would be restored.

“The Service’s decision to reinstate Grimm’s work was made in recognition of the fact that her work was judged the winner during a fair and open public contest,” the agency said in a statement. “The Service respects the decision of the contest judges, and apologizes for any distress this process may have caused the top-placing artists and their families, teachers and friends.”
Madison’s painting will be featured on the $5 duck stamp, which, while not valid for postage, helps support environmental education. She will also receive a $5,000 scholarship.
Adam Grimm, Madison’s dad and a professional wildlife artist, said he knew his daughter hadn’t done anything wrong. 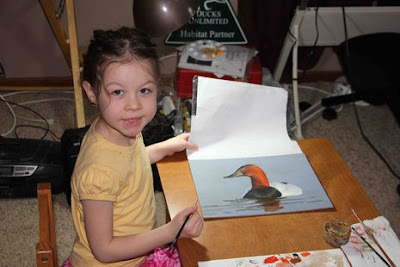 Are you kidding me?

The Entry Requirements clearly state:
Design entries must be contestant's original, hand-drawn creation and may not be traced or copied from published photographs or other artists' works.

Laying a piece of graphite paper under a photograph and then drawing over the original is technically tracing if you ask me.  But no one did....thank goodness.

Sigh..........
I am all for encouraging budding artists to explore their creativity.
This whole ordeal just saddens me on so many artistic and moral levels.

I do wish Madison success in her creative endeavors.

On a happier note:  People still need the little stamps!