The History of the Color Wheel

Photo by astro-dudes
The first color wheel has been attributed to Sir Isaac Newton, who in 1706 arranged red, orange, yellow, green, blue, indigo, and violet into a natural progression on a rotating disk. As the disk spins, the colors blur together so rapidly that the human eye sees white. From there the organization of color has taken many forms, from tables and charts, to triangles and and wheels the history.
(Source: ColourLovers ) 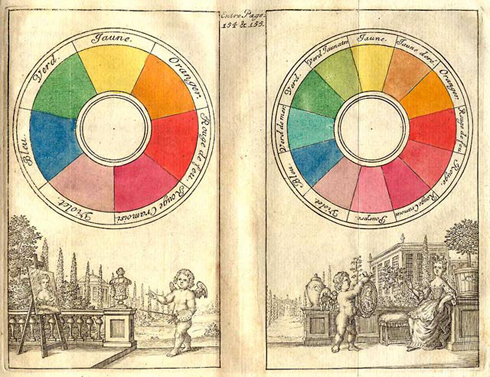 Two color circles are included as illustrations in the 1708 edition of Traité de la peinture en mignature, an artist's manual attributed to "C.B." (often assumed to be Claude Boutet, or the publisher, Christophe Ballard). Connections between Newtonian theories about color and this pair of circles are apparent in the design and the accompanying text. It is less clear, however, whether those theories were a direct source of inspiration. The first circle contains seven colors, violet, blue, green, yellow, orange, scarlet, and crimson. A second circle adds golden yellow, red, purple, sea green and yellow-green for a total of twelve colors. Overall, their inclusion is somewhat mysterious.
Nifty and Unusual Color Wheels Found in Life and Art
The Happy Hour color wheel consists of exotic cocktail umbrellas. It was created by Bright Lights Little City:
﻿ 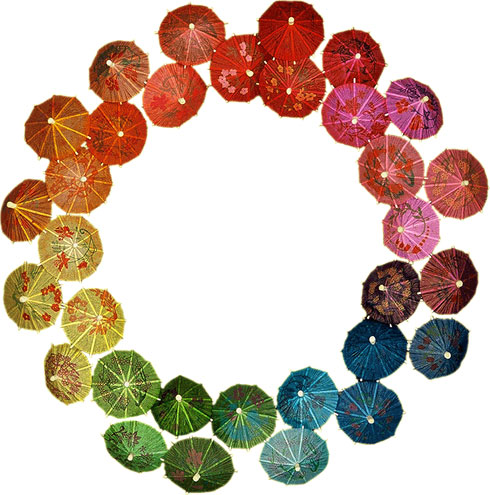 ﻿
The Circle of Life color wheel was created by Thalandor as a tribute to the artist Mother Nature: 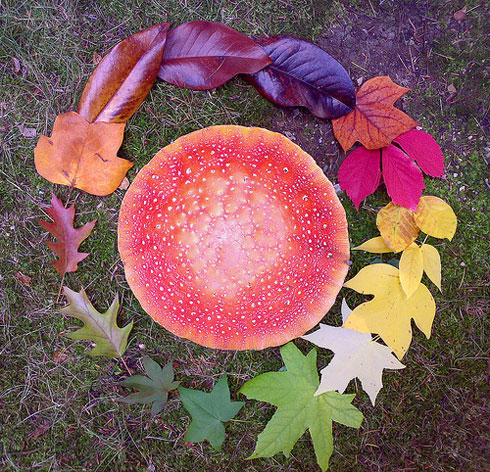 Color or colour (see spelling differences) is the visual perceptual property corresponding in humans to the categories called red, blue, yellow, green and others. Color derives from the spectrum of light (distribution of light power versus wavelength) interacting in the eye with the spectral sensitivities of the light receptors. Color categories and physical specifications of color are also associated with objects, materials, light sources, etc., based on their physical properties such as light absorption, reflection, or emission spectra. By defining a color space, colors can be identified numerically by their coordinates.
Because perception of color stems from the varying spectral sensitivity of different types of cone cells in the retina to different parts of the spectrum, colors may be defined and quantified by the degree to which they stimulate these cells. These physical or physiological quantifications of color, however, do not fully explain the psychophysical perception of color appearance.
The science of color is sometimes called chromatics, chromatography, colorimetry, or simply color science. It includes the perception of color by the human eye and brain, the origin of color in materials, color theory, in art, and the physics of  electromagnetic radiation in the visible range  (that is, what we commonly refer to simply as light). Via:  Wiki Color

Give me a box of Crayola's and a pack of paper and I am a happy camper.
Thanks for Visiting!
﻿
Posted by P.E.N. Studio